I aired up the Ross and oiled the chain to ride it to work today.
It takes four minutes to drive, six to ride. Then it takes a couple minutes to park, but can I carry the bike up into the office, where my new bosses also ride their bikes to work. Cool. Unfortunately, the cork tape I’ve had on the bike for years and years (six?), and re-wrapped a dozen times has unraveled like the sleeve of time. When I came home for lunch I took five minutes to secure the ends, but couldn’t find any electrical tape. Also, I’m pretty sure the only tape I’ve got that wasn’t old when this bike was new is red, which doesn’t work with the severe black-and-silver Gondor theme I’ve got going here.
It’s a fairly plain bike, made of pure Allentown 1020, so maybe more a Lyle Alzedo / Oakland Raiders theme. 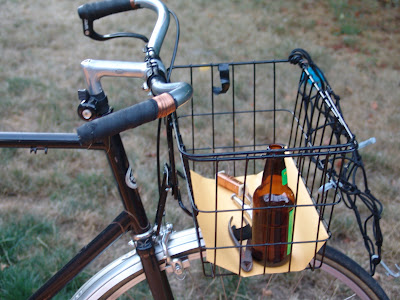 Anyway, I’ve never been a fan of the Rivendell twine finish for bar wrap, but I stole the basic principle and applied it to copper wire. I did a thrash job for a couple of reasons:
1. I’d already eaten lunch and only had a couple minutes until I had to be back at work.
2. As Pablo Picasso said, great geniuses are too busy breaking new ground to make things look beautiful. Leave that to the lesser artists.
3. I was going to change the bars tonight, but I blogged about the old ones instead.
4. Pablo Picasso was an asshole.* 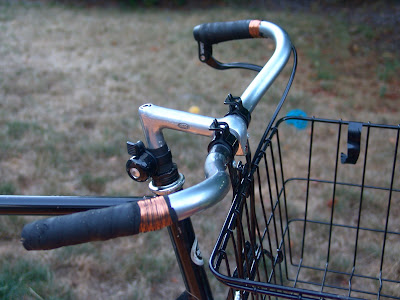 This is what came out of the art bin, but I know I have some stainless steel wire. Which I bought for art purposes. Which is what I’ll use when I get fresh tape and put the moustache bars back on. 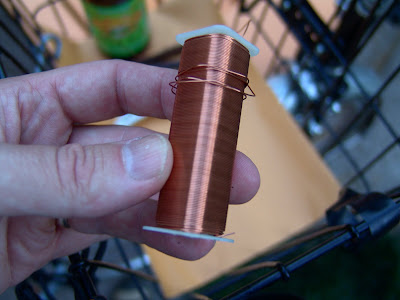 These are the essential tools: wire, needle-nosed vice-grips, dikes so old that little Dutch boy probably lost a finger to them. Beer. 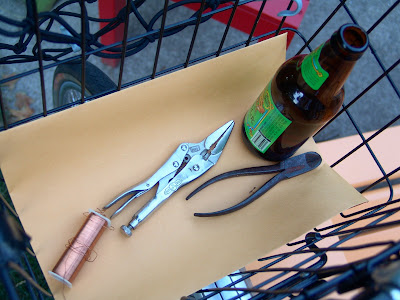 Put down a loop of wire, and then wrap over it. 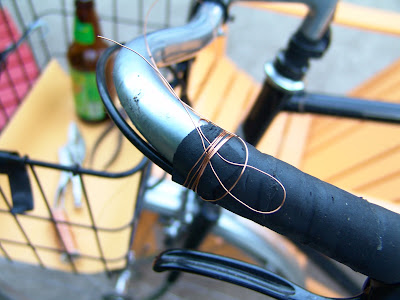 Wrap, wrap, wrap wrap wrap.
I went from the ‘far’ end toward the loop, leaving spaces but pulling tightly, then back and forth, dropping the new wraps into the old gaps. I crossed under the bar, so the top looked more smooth. Next time I’ll put the loop underneath, too. 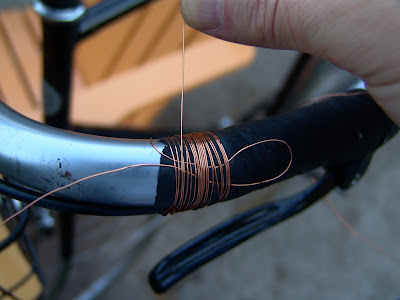 When I was ‘done’ wrapping, I put the newly cut end through the loop I started with…
I’d been working off the spool, which was in my pocket – kept it close and corralled, but let it unspool cleanly. 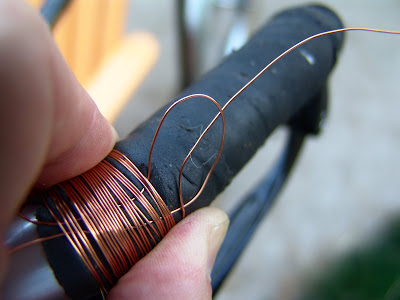 …and pulled the other (original) free end back underneath the wrap with the pliers. The loop part disappeared under the wrap, along with the captured second end. 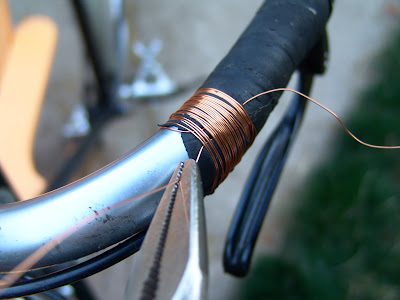 Snip snip on each end, then kind of shove the one sharp end under the wrapping with the tip of the dikes and Bob’s yer uncle!
Copper-wire-finished bar wrap. 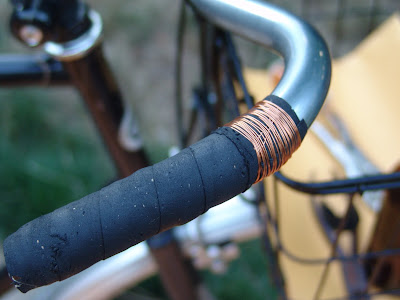 And it’s darkening outside… time to put the kid to bed. 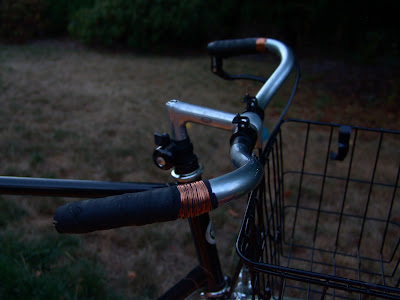 *In his avocado el Dorado.

One thought on “Copper wire to finish off your bar wrap.”