**Update** These pedals are now available for sale from BikeTinker.com

A while ago I posted about the skate-deck platforms I made to clip into clipless pedals. I screwed old Eggbeater cleats into cut-out chunks of skateboard deck, then clipped the platforms into the pedals, so I could ride in regular shoes. 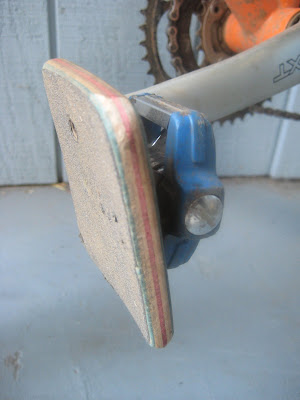 After more than two years of almost daily use on a couple different bikes, I finally broke one. The pedal pulled off the cleat on a hard pedal strike, stripping the screws right out of the wood.

I filled in the holes on both platforms with wood and glue, figuring to redrill a small hole and thread the screws in, but I chickened out, when I realized that the plug (a random dry stick, broken to fit) was a lot softer than the laminated skate deck.
Instead, I cut the pedals down to a smaller size, and drilled new holes. 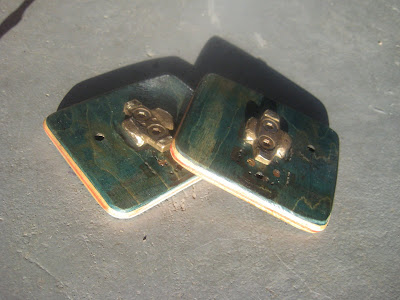 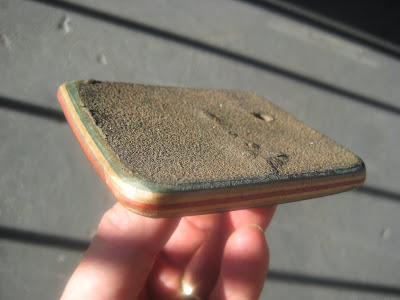 The part I cut off was the curve I’d had in the originals. It was fine with all my shoes, except the Keens I got this year, so I wanted to try some skatepedals that were (mostly) flat. 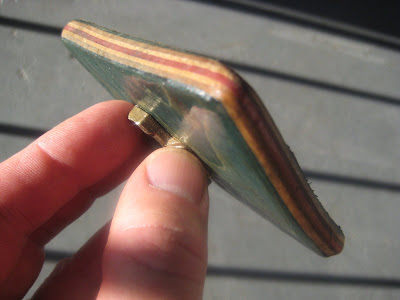 In the course of the refurbishment, I sanded the old graphics off the decks and put on some varnish, so they look a little nicer. New grip tape would really round out the package. I’m still really enamored of grip tape for pedals.