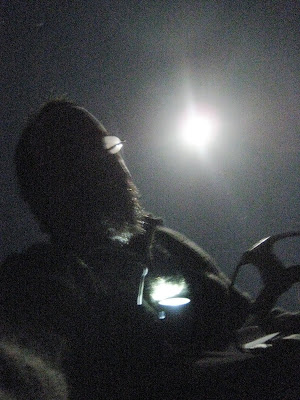 There’s nothing I love so much as riding alone under a full moon. Tonight I rode the Ross fixed gear out Baker Creek, listening to the babbling of the creek and the rattling of my battery light.
The light didn’t do much illuminating. The moon was much brighter.

When I got fairly far out there, I was surprised that I could spin the rear tire, seated, on a flat road. The road was sparkly with tiny ice crystals, and a little farther up everything was frosty, like it had snowed. When I turned around, I got a little creeped out by the idea of a mountain lion drawing a bead on me. Big stinky prey.
I was pretty careful coming back down the hill, and through the frostiest low section next to the creek. The careful pace became a habit, until I realized I was never going to make it home at that speed, and my thumbs were starting to smart from the cold again. I stopped and listened to an owl hooting for love, then hauled ass home.
Coming by Grenfell Park, I noticed a funny crackly feeling in my beard, and put my hand up to my face. Ice! Ice in my beard! Crazy.

I saw three cars the whole time, and two of them when I was almost back to ‘civilization,’ so they almost didn’t count. In the last mile home I felt a couple of raindrops and hurried on even faster, still being careful to take the corners kind of wide and upright. Apparently I’m still afraid of these 25mm tires!