I was pleased to see this book at my library, and picked it up. I’ve followed the GDR and Tour Divide off and on for several years, much more than I’ve followed any other bike racing, but had only read Kent Peterson’s Dirt Rag article peoples’ blog posts on it.

I recommend this book to people who’ve never heard of racing the Great Divide, and to people who follow it year-to-year.

Paul Howard ups the suspense of whether he will finish the longest mountain bike race in the world, by admitting he had never owned a mountain bike before the trip, and downplaying his cycling experience and fitness.

The book jacket calls the book “hilarious,” but I don’t hold that against the author. The book industry appears to be in the grip of a Humor Bubble; I’m reading a much funnier book now, which the jacket has to describe as “occasionally hysterical.” I would call Eat, Sleep, Ride “witty in a pleasant English way.”

Howard brings a sense of history to the land he’s cycling through. The stories, some of which I knew (the cannibal ones), complement the experiences he and his ad hoc group of racers have on the Trail.

While the Tour Divide is a solo race, riders of similar ability clump together for mutual morale and social support. Sharing physical support would get them disqualified from the race.

We get to know some of the riders he rides with and encounters, focusing mostly on the underprepared, which is inspiring and interesting, but slightly disengenuous. I’d do a little more research before making my plans for next year’s race. Non-super humans complete the race every year, but I wouldn’t approach it lightly.

I would have liked to see more on the leaders Matthew Lee, the winner, and Jay and Tracey Petervary in third on a tandem. Since Howard finished second to last, his group’s interaction with the leaders was mostly hearing that they’d passed through a town a week before, or that they were “only” one state ahead.

I also wanted to know more about Deanna Adams, and her experience in the race. She is the first (and only, so far) finisher of the Tour Divide on a fixed gear bicycle. I ride fixed offroad some, and I’ve been disappointed every year that the fixies had to scratch. I think riding the route on a fixed gear is even harder than it sounds, and this is the category I’m dying to see inaugurated. Unfortunately, Deanna was relegated (disqualified from official standing) for a route error. The next finisher will be referred to as the “first official fixed gear finisher.”

I liked this book, and now I want to see the movie “Ride the Divide” that Kent promotes on his blog. 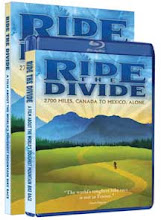