My type of Aucklander…, originally uploaded by ibikenz.

I was in Auckland, NZ for three hours once, in 1988, on a layover from Australia. Two weird things happened in Auckland – I was paged on the PA, but it turned out to be a DIFFERENT “Philip Williamson” (50ish, British) who was wanted.
And my bike stayed there. It was supposed to go to OAKland, but they took it off in AUKland. 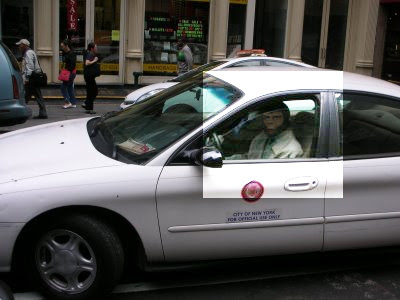 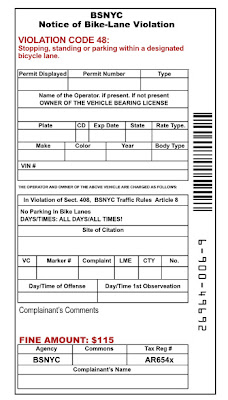 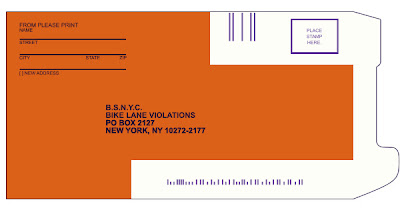 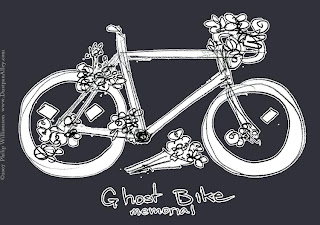 I had such a good time at the North American Handbuilt Bicycle Show, you couldn’t believe!

I arrived shortly before closing, because Amtrack was… six-plus hours late. I actually laughed out loud when I realized (sitting in the train for an hour in a marsh in Benicia) that I might miss the show for a second year in a row! Last year, I broke my arm two days before it, and was in surgery on the day I was supposed to be there. About three seconds after that I got really angry, thinking that I might get in so late that I’d be stuck in San Jose!

My friend Mark saw the whole show twice, came to the station three or four times and had to walk a dozen blocks to find a cell-phone charger for his car so he could find out what happened to me. Total hero. 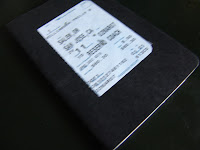 My other friend Mike I was supposed to meet up with there said he kept marvelling at things going “there’s no way Phil* would willingly miss this!”

I also missed out on meeting the iBOB (Internet Bridgestone Owner’s Bunch) folks, which was a real shame. I spend a lot of time internet-yakking about bikes with them, and I would’ve really liked to meet some of them face-to-face. Ah well, I guess I’ll remain a mysterious cypher for another year. (Yeah, that cracked me up, too… or was it only me?)

I did meet Rick and Gina. He remembered that Angelina had bought my knickers for me, and I told Gina I liked her bike. She’d had the same trouble with the Amtrak pizza that I had (chicken mysteriously become sausage and pepperoni). They’re really cool. I’m happy they’re part of my internet circle.

I talked to a guy at the Bilenky booth while I was waiting for Mark to get back from parking the car (and after I’d just walked in without paying – sorry, I didn’t see anyone taking money that late).
Wow. I’d heard about Bilenky for years, but never seen the caliber and coolness of their bikes. 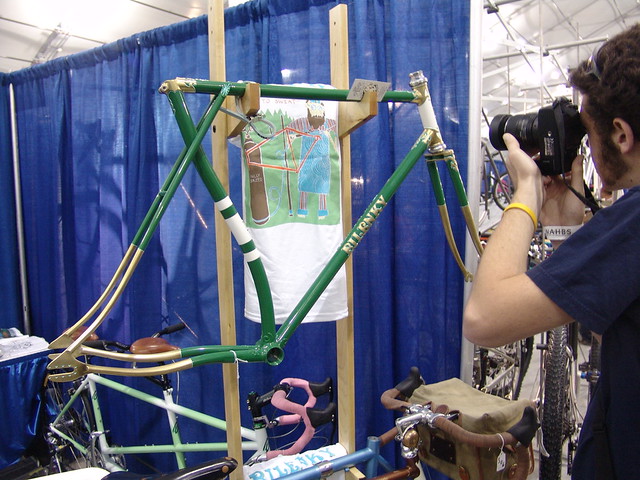 Mark made a big deal out of showing the girl at the gate his wristband, which almost blew my cover, and we were off! I was like a kid on a sugar high going back into the candy store. I think I may have been a little much for some people coming off the second day of a big show, but most of them seemed as amped as I was.

The thing I did this year that I wanted to do last year, was get builders’ autographs and a little line-drawing of a bicycle. Kind of a bike-signature, which is a pretty weird idea. Over all, I’d say most people were surprised and flattered. Some were non-plussed but did it anyway. Very few actually came across with a drawing, but the ones that did were great!

I saw Richard Sachs in his booth, and looked at his bikes. Mmmm… smooth. Ira Ryan was away from his booth, but I got a shot of his pink porter**. If he had a ‘cross bike there, I spaced it out, but the pictures I’ve seen of his ‘cross bikes… they have a different aesthetic than Sachs’, but maybe more my style.

I got Sacha (Vanilla) White’s autograph. He’s super-friendly, coming out to meet anyone stopping into his booth and chatting them up. Cool. He talked a bit about teaming up with Rapha for a couple things, and how they sponsored his ‘cross team with a load of gloves and gear (knickers?). We agreed that it seemed like a perfect match, with them “kinda coming from the same aesthetic.” 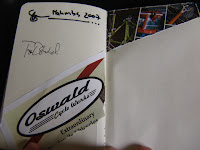 That’s Sacha White’s autograph at the top of the page. Tom Oswald was about the last guy I talked to, he was starting away from his booth as they were shutting off the lights, but came back to talk to me. I was inarticulate and weird, and he was gracious and smart. Oddly, he randomly chose to sign under Sacha, bringing it full circle.

I got to Bruce Gordon’s booth and flitted from bike to bike like a crazy moth, or possibly a bee. “Wow. I didn’t know… look at this! And… hey!” I could kind of see the Petaluma influence on my aesthetic, and the Rock n’ Road genealogy in my Quickbeam. Great stuff. 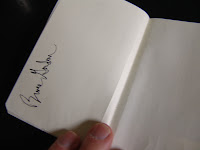 I asked Bruce for his autograph, and he said “sure, if you buy my CD – it has professionaly pictures of every bike here, I’ll sign anything you want!” I was like “I paid $5 for a Heineken***, I’ll buy your $7 CD.” I asked him if he remembered my friends from Dempsey’s. He did, which launched him on a good reminiscence, culminating in “that Lisa – she was as cute as a bug’s ear!”
Then he spied Mark’s camera. “Are you shooting FILM? Is that a… no. Wow. Can I hold it?” Apparently he used to be a “Nikon man – Nikon FM,” but he really coveted a Leica. If I ever see him again, he won’t remember me for our mutual friends… I’ll be the “Guy with the Leica Guy.” :^)

I talked to Mr. Old Man Mountain, and admired his Alfine bike. No fenders, but a nice minimal rack (panniers only). I liked the bars especially well. They were milled down out of a big chunk of aluminum. I was like… “so you work with Old Man Mountain racks and make the bikes?” and he was like “oh, I’ve been doing the racks a long time, it’s all me.”
He’s a young guy, and for some reason I expected sort of an old man… 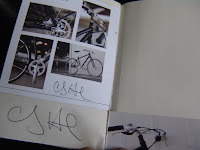 Got Rick Hunter‘s autograph, and he loaded me down with a pocketful of postcards. Nice guy, really affable. I’d only ever really seen (paid attention to?) his forks, usually attached to Matt Chester customs. His bikes looked great! I love me the curvy-tubed 29ers! 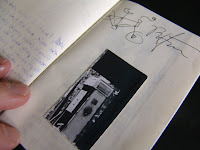 Speaking of which, I only sideswiped the Retrotec booth, but those bikes looked a lot more put-together than the ink-jet four-page catalog he sent me a couple years ago. Yow. Nice. No pics. :(

I got Wes Williams’ signature, and got to tell him I’m happy he’s back in the bike business. He said he took a break to sell cars “for good money – real good money.” Maybe I should do that. 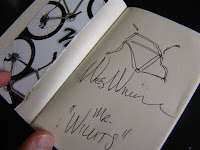 He drew me a Mountie, which is the original curvy-tube 29er. That is a good-looking bike. The one he drew looked like it had a rigid, curved fork, too. Nice.

I spent a little time in the Ahearne booth, because the details in his frames are so… detailed. They’ve got my found-object funky aesthetic going, along with my bike-love. I talked to Joseph Ahearne about “bikes-as-art,” and he was really amenable to showing some frames at the McMinnville Art Walk if I could arrange it. Woo. We’ll see. That would be totally cool. It could be across from Tommy’s Bikes in the Courtyard where we used to have our shop, and, and… :^) 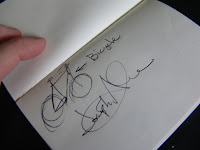 Cool guy. He was really into the autograph thing; he seemed to think it was flattering and hilarious at the same time. His bike drawing was exactly the kind of thing I was looking for. He showed it to his friend in the booth, who was like “mmm… maybe it needs an arrow pointing to it that says ‘bicycle’…”

I’d gone by Steve Potts’ booth and took a billion pictures of the vintage blue Potts up on the rack, and chatted with the woman manning**** the booth while Steve was talking to the Reynolds people. After I scared Tom Oswald with my stalker-like intensity I spied Steve back at his booth and went over to see him. Steve Potts’ bikes really formed my idea of what a mountain bike, and a bike in general, should be. I’d seen him around, and been by the WTB shop a couple times, but I finally got to tell him that. It was good. 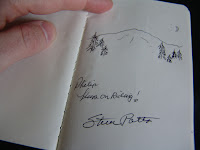 I introduced myself as a born-and-bred Mill Valley boy and asked for his autograph, “and a little drawing, maybe a bicycle or something,” and asked if he remembered my old friend Will Hassinger, who used to work at WTB. “Let me tell you something about Will,” he enthused, “I knew Will before he was born!” He went to work on the drawing, and told me stories about Will as a kid, “eight years old, with his skinny butt sticking up out of the dumpster, looking for mechanical things – to take apart! – I LOVE Will!” That would’ve been about when we used to crash into each other to see who had the harder head. I believe it was a tie.

He went back to the drawing, and asked me if I still lived in Mill Valley. I described McMinnville, and he said he knew it; he’d gone through last year and really liked it. They (him and who, I dunno) take road trips all over the country and never touch the interstate. “That’s how you see the country – the real country.”
He said he was coming up again, and he’d be in my store. “We’ll have dinner together!” I said “Sure! My wife’s the best cook in the world!” I left there dead chuffed. Steve Potts is coming over to my house! :^)

After we got in the car and drove away (ignoring the talking navigator’s bogus directions), I spied a beautiful silver bike flowing through traffic, and I tried to see what it was. Mark was like, “is it a Bianchi? Chrome?” I’m craning my neck, and then I refocus and I’m like “that’s GINA‘s bike!”
Sure ’nuff, Rick and Gina, moving through the streets like fish.

The show, even though I only got about two hours of it, was a total knockout. I can’t wait for next year’s, which should be in Portland. Very exciting, and a whole lot closer.

* Mike is one of about seven people who are actually allowed to call me “Phil,” since they knew me when it was really my name. They’re the ones who’d call my house and say “Is Phil there?” And get my mom going, “No. There’s no ‘Phil‘ here.” long pause. “There’s a Philip. Would you like to speak with HIM?” They put in the time, they get the perks.
** I’m officially tired of the French spelling. Partly because I have to pronounce French words all French, which is irritating and affected, but mostly because I’m a Porter, (by way of my mom), and I drink Anchor and Deschutes porter, and I went to Porter College, and we live in America, dammit.
*** On the train.
**** :^)